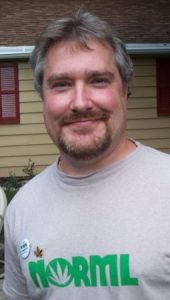 Richard A. Martin, Jr. (NORML Rich) became the Field Director of Northern Wisconsin NORML in January 2019.  Prior to that, he was our Executive Director.  He is a Field Activist in Outgamie County.

Rich grew up in the Fox Valley. He graduated from Appleton West High School in 1985. He joined the Military after that, and is a 12 year veteran of the United States Army, where he he served as a medic during Operation Desert Storm, Desert Shield, and Operation Joint Endeavor.

Affordable healthcare for American citizens is a high priority for him. Mr. Martin took an interest in Politics after leaving the service.

When serving our country, Rich swore an oath to uphold and defend the Constitution. He took that oath very seriously. However, upon returning home, he found that so many of the freedoms and liberties he fought to defend, were being legislated away here at home. Rich is a very civic minded citizen and volunteers in his community.

Richard Martin, JR. is not a business owner, and is not beholden to any corporate or private interests. He is a concerned citizen who has done a great deal of research into his local and state government processes.