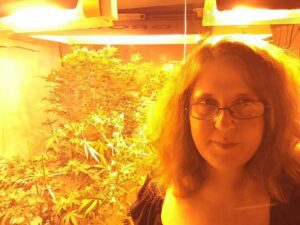 Jessica Struzik (NORML Jessie) is the co-founder of Northern Wisconsin NORML. She is the current chapter Secretary, and a Field Activist in Marinette County.

In 2010, she formed the Friends of Jay Selthofner and served as the Treasurer for his campaign for State Assembly in our district.  We ran as independents, on a platform of legalizing both cannabis and hemp for medical and industrial purposes.  We marched in countless parades, wrote letters to the editor, hand painted campaign signs, tabled at the county fair and other events, held a concert, and generally did all that we could to bring awareness to our cause with almost no budget.  We earned nearly 10% of the vote based solely on our platform of legalization!

Jessica was also present for the first exploratory meeting of Southeastern Wisconsin NORML in 2010.  She helped to form the SE WI NORML chapter, and she drove from Ripon to Milwaukee for every single meeting, barbecue and march for 2+ years.

She served as the interim Secretary for Southeastern WI NORML several times as needed. She paid for and created their first website, and then maintained it for 6+ years. She also created and maintained the chapter’s facebook page, facebook group, and other social media profiles for several years.

Jessica moved to Menominee, Michigan in 2014 in order to participate in the Medical Marijuana Program, which was voted into place by Michigan voters in 2008.

In 2017, she became a registered Caregiver in the Michigan Medical Marihuana Program and provides medicine to patients under the MMA.

She continues to perform both online and street activism in both Wisconsin and Michigan.

Jessica Struzik is also the owner of Green Web Design, Chamber of CannaBiz and an Online Classified Advertising website.

Originally from Milwaukee, Jessica has been writing essays about how evil the drug war is since she was a freshman in high school and smoked cannabis for the first time at the age of 14.  She marched in her first Milwaukee legalization march in the summer of 1995 when she was 18 years old.

I believe that legalizing cannabis and hemp is a matter of fairness in the free market – it is a legitimate product which consumers want to buy, and is far safer and less addictive than sugar, caffeine, tobacco, alcohol, prescription painkillers, artificial tanning, gambling, sex, food, and many other legal “highs”.

I also believe that decriminalizing cannabis and hemp for all uses is a matter of personal freedom, as well as states rights. How can we call ourselves the “Land of the Free and the Home of the Brave”, if we won’t bravely allow everyone to be free?

The majority of cannabis users are peaceful people who are not hurting anyone, not even themselves. The real damage occurs when we kick in their doors, shoot their dogs, put their children in foster care, take away all of their money and possessions, incarcerate them (removing them from the workforce) and stigmatize them so that they are unable to obtain a decent wage in the future. We waste valuable taxpayer dollars incarcerating people and destroying their lives, families, and as a consequence of this, we destroy peoples’ health in the process. We do this to “protect” people from themselves? Personal freedom is important to me. Not wasting our taxpayer dollars is also important to me.

Cannabis (or, if you insist on using outdated slang, “marijuana”) is medicine. Hemp is a fiber, a food, a fuel, and more! There are even those who use it as a religious sacrament. There are many reasons these important plants should be legalized and utilized. Cannabis and Hemp have been valuable to our society in the past, and can be again.

Join Northern Wisconsin NORML today and BE the change you want to see in the world. Help make a difference and educate the public and our lawmakers so that we can change un-just laws which hurt not only peaceful US citizens, but our entire society and neighboring countries as well.”